An essay by John Gough, ex-chairman of the Society, author of “The Midland Railway : a chronology” and many other works.

Mileposts are one of the most distinctive features of lineside furniture on Britain’s railways. They range from clear, well-designed, distinctive products to simple wooden posts with a number painted on them. I would argue - just a little tendentiously, perhaps - that those of the Midland, the North Eastern, and the Caledonian are arguably not only the most interesting designs but also those most fitted to their purpose. And of these I think the Midland’s are the clearest of all. Distinctive they most certainly are - the moment you see one, you know which company’s line you are looking at, even in the absence of any other information!

All railways were required to provide quarter-mile posts along their lines. Section 94 of the Railways' Clauses Act of 1845 provides that: "The company shall cause the length of the railway to be measured, and milestones, posts, or other conspicuous objects to be set up and maintained along the whole line thereof, at the distance of one quarter of a mile from each other, with numbers or marks inscribed thereon denoting such distances." This provision was never repealed.

The Midland Railway’s nineteenth-century practice was no different from that of other companies. Each line had its own zero-point and its own sequence of mileposts. These are shewn clearly on the first-edition 25" Ordnance Survey sheets. Their sequences can also be found on the Midland’s 1874 gradient diagrams. Thus mileposts ran from Hitchin to Wigston North Junction, from Rugby to Derby, from Derby to Leeds, from Birmingham to Gloucester, from Bristol to Gloucester, and so on. I know of only one survival of this old mileposting. The zero-point for the Manchester line was at Ambergate, and the sequence of posts ran through to Ashburys East Junction at 46 miles 24 chains. By the time the new mileposts were installed the maintenance responsibilities on the Sheffield & Midland joint line had changed and the Midland no longer looked after the section north of Reddish Junction, with the result that the last “modern” Midland milepost is mp 181 at Reddish Junction, after which the posts still follow the old measurement reading from Ambergate because neither the Great Central company nor its successors ever made any changes thence to Ashburys.

Early this century the Midland carried out a systematic re-mileposting of the whole of its system. I am not sure of the precise date of the decision, and I have not myself seen any minute authorising the work. I believe, however, from the evidence of the Distance Diagrams that the task was carried out during 1907. From the first appearance of the diagrams in 1873 up to and including those sheets issued anew in January 1907 the note at the foot of the page about the continuous distances reads: “The continuous Distances are from St Pancras Passenger Station by the Shortest Route.” The new editions issued in January 1908 not only shew additional distance information relating to the mileposts but also change this note by the addition of a second line. The first line is a slightly modified version of the original, reading: “The continuous Distances not in brackets are from St Pancras Passenger Station by the Shortest Route.” The new second line states: “The continuous Distances in brackets represent the Mile Post Mileage (New)” [no full-stop]. This is the formulation used up to and including sheets issued in January 1913, after which the “(New)” is dropped. Certain sheets, such as those for the West Line, have slightly different formulations for the milepost sentence, to make the situation as clear as possible. Thus, for example, the 1912 issue (fifth edition) of sheet 49 has: “The continuous Distances in Brackets are from London Road Junction, Derby, via Whitacre, Camp Hill, & Redditch, and represent the Mile Post Mileage (New).” 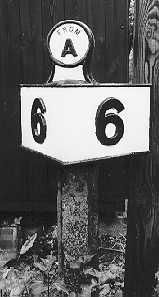 It was this thorough-going re-mileposting of the system that brought about the introduction of the very distinctive Midland mileposts (see the drawing at Figure 4, page 14, in Midland Style by George Dow, Historical Model Railway Society, Bromley 1975). There are three basic styles, one for the full miles, one for the fractions, and one for locations with limited space. The first two are designed to be equally visible from both directions and use the angled design also employed by the company for its station running-in boards. These are the very well known shapes still seen all over the Midland system. In both cases the post can be topped by a small disc to shew the zero-point from which the measurement runs. Much rarer (because not normally necessary) was the use of a flat-plate design, where space was limited. There are two examples of this at Kettering, where milepost 72 posts can be seen on both the up slow and the up fast platforms. An example of a flat-post fraction is at Dock Junction, where milepost (0)3/4 is mounted on the wall behind which the line down to the Metropolitan descends. The full-mile "posts" of this type are rectangular and identical to the Midland's bridge-number plates. The fraction "posts" are oval. The mileposts are normally located on the up side of the line - and there are very few exceptions indeed to this rule (such as, for example milepost 30 just south of Luton station). The measurement generally increases in the down direction.

This re-mileposting was carried out thoroughly systematically. Wherever possible the mileposting runs through from zero at London St Pancras by the shortest route. In other words, wherever there was a facing junction into a branch along the line the posts were continued along the branch in the same sequence. Thus the mileposting from St Pancras runs via Knighton South Junction (97m 46ch) and Saffron Lane Junction (97m 76ch) via Birmingham Curve Junction (126m 40ch) to Leicester Junction (127m 0ch) and Branston Junction (127m 20ch) at Burton-on-Trent, and the measurement from London also ran from Woodville Junction through Woodville and Swadlincote to Swadlincote Junction (where, of course, it then gave way to the shorter direct measurement). Another example is at Dore, where the sequence of mileposts from London via Leicester and Trent is continued from Dore South Junction round the south curve and on to Chinley North Junction, where milepost 174 via the Hope Valley stands only a few yards away from milepost 168 1/2 via Derby North Junction and Matlock. The main line of the Hope Valley line between Dore & Totley Station Junction and Dore West Junction is actually measured from a zero at Dore West! At the Chinley end, the curve between Chinley East Junction and Chinley South Junction continues the shorter measurement from London via Matlock rather than the longer one from London via the Hope Valley. A branch joining the main line by a trailing junction had its own zero-point at the junction and was measured from that point. Thus the Lincoln line begins with a zero at Nottingham London Road Junction. The Syston & Peterborough line is an especially interesting case, since this was originally posted as a single unit. However, in the revised form its central portion, from Manton Junction to Melton Junction, constituted a part of the through route from London to the North via Kettering and Nottingham and was mileposted accordingly. This meant that the eastern section became a branch from Manton to Peterbrooguh meeting the main line in a trailing junction and therefore staring from zero at Manton, whilst the western section became a branch from Syston to Melton Junction meeting the main line by a facing junction at Syston and therefore continuing the sequence from London via Leicester.

The principal Midland sequence is of course that of the main line from London to Carlisle. This takes St Pancras as its zero-point and runs via the Bedford Curve, Sharnbrook Summit (passenger lines), Leicester, Trent Station, Clay Cross, the Old Road, Cudworth, Normanton, the Whitehall Curve, and Hellifield to Petterill Bridge Junction at 307 miles 14 chains. This meant that the Midland was one of only two British railway companies to have a milepost 300 on the system (the other being the Great Western). Milepost 300 is quarter of a mile north of Low House Crossing. (Milepost 200 is a quarter of a mile north of Newlay & Horsforth station and milepost 100 is immediately to the north of the former Humberstone Road station in Leicester.)

On the West Line the zero-point is London Road Junction in Derby, and the zero-post is clearly to be seen on the down side of the railway from London (up side towards Bristol). Because the Kingsbury & Water Orton Line was not built till after the re-mileposting, the mileposts take the original and longer route through Whitacre Junction on their route from Derby towards Birmingham, but they then follow the usual shortest-route practice by running from Landor Street Junction direct to St Andrew’s Junction and then on to Camp Hill and beyond.

The headquarters station of Derby itself is quite an interesting case. As noted, London Road Junction is the zero-point for the West Line. The main sequence of mileposts actually avoided Derby station, running from Spondon Junction through Chaddesden to Derby South Junction and then round the avoiding line to Derby North Junction and on to Ambergate - thus taking, as always, the most direct route from London. The sequence of posts from London continued from Spondon Junction along the Litchurch Loop and through Derby station and to Derby North Junction. There has been an alteration here since the closure of the Chaddesden line: the section of line between the station and the site of Derby North Junction has been back-posted from the north junction, so that there is now a meeting-point in Derby between two sequences, with London Road Junction being 128m 23ch from London via the Litchurch Loop and 127m 54ch measured back from the north junction (as well, of course, as being 0m 0ch for the West Line). At Ambergate the sequence from London continues north to Clay Cross South Junction, where it naturally gives way to the shorter sequence from London via the Erewash Valley and to Manchester.

Joint lines did not always, of course, follow the normal pattern. What was done depended on a number of aspects, including the maintenance arrangements. I have already mentioned the case of the northern end of the Sheffield & Midland joint line into Manchester. The southern end of that line duly observes Midland practice, with a zero for the Hayfield branch at New Mills Station Junction and the end of the branch just beyond 2 3/4 miles. The Swinton & Knottingley line was maintained by the Midland as far as the bridge at Moorthorpe over the West Riding & Grimsby line and it therefore received new Midland mileposts over this section. Many of these have now gone, to be replaced by "second-hand" North Eastern mileposts, but there is a very good Midland 174 3/4 post still in place on the Moorthorpe Station Junction to South Kirkby Junction curve, where it can be easily seen from any Sheffield to Wakefield service taking the S&K route.

On the whole, Midland mileposts have proved robust and fit for their purpose, and most of them are still in place. Some have been broken - there is an example just north of St Albans at the moment - or lost and have been replaced by more modern designs that are not as functional and certainly do not have the same aesthetic appeal. In some cases, as on parts of the line over Sharnbrook, additional modern posts have been provided on the fast lines to duplicate the information given by the original Midland posts at a different level across on the goods lines (now the slow line). There has been surprisingly little re-mileposting to take account of the rationalisations of recent years. Derby station is one such example, but there are few others. Perhaps a case could be made for some replica Midland posts to provide a nice continuous sequence from Chinley North Junction via the Hope Valley (i.e. 174 miles) through to Edgeley Junction via New Mills South Junction, the Hazel Grove junctions, and Davenport.