The Midland Railway Company used many pieces of simple yet effective signalling equipment, and the object in the accompanying photograph is one of these, the Annett’s Key. The name being derived from it’s inventor James Edward Annett, a former LB&SCR Signal Superintendent, who Patented the point locking key system, No. 3427, in October 1875. 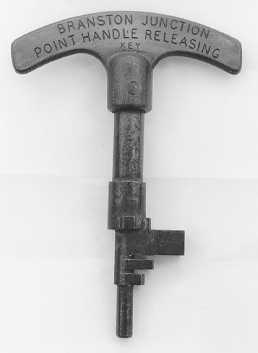 The key shown is actually an LMS Annett’s Key, but MR key’s were of the same design except that the style of engraving was slightly different. The T shaped key stands about 6" tall and consists of a flat brass curved top which acts as a carrying handle and description plate, this is riveted to a steel shaft which forms the key. It’s purpose is to act as a simple key to unlock points which were worked from ground frames, or lever stages as the MR preferred to call them, on double lines of railway, and not worked directly from the signal box in which the key was kept, and also at the same time locked points and signals in that signal box to provide protection for shunting at the lever stage. Thus allowing points to be safely operated at some distance from a signal box and yet to be controlled from that box. The key would, when not required, be found in a lock attached to the end plate of the signal box lever frame and it could only be removed from this lock by turning it when certain point and signal levers in that lever frame were in their normal position. Once removed these point and signal levers were locked in that position, and the key would then be taken by a guard or shunter to the lever stage working the points it was designated to unlock. It would be placed in a similar lock to that one found in the signal box, turned, and so unlocking the levers at the lever stage allowing any shunting etc. to commence. The key could only be taken back to the signal box when the levers at the lever stage had been returned to their normal position, so ensuring the main line was once again clear for traffic. Once the key was replaced in the signal box lock the point and signal levers previously locked in their normal position would now become free to be worked as necessary, locking the key in it’s lock. The levers at the lever stage now again being locked in their normal positions.

This method of locking points on double lines of railway situated some distance from a signal box was quickly taken up by other railway company’s, but for some reason the MR did not install it immediately. The 1875 Patent had been bought by the Saxby and Farmer signal company in 1881, so ensuring their control of it’s manufacture for some years. Possibly the MR did not want to purchase locks and keys from them, and following a number of Saxby and Farmer patent infringement court cases, the MR perhaps felt uneasy about manufacturing a similar style of key locking system themselves. They got around this by locking lever stages by other means, but that’s another story.

The MR started to use the Annett’s key system about the 1893, following what seems to have been an experiment at Grimesthorpe in Sheffield, when a Tablet was substituted for the key. Did the MR wait until the patent had ran out, as they then seem to have manufactured both the locks and key’s themselves. They then went on to install this system at a fair number of locations, with lists of them appearing in the MR Appendices to the Working Time Table. Later the Annett’s key system was also adapted for locking other things such as motor point crank handles and, as in the case of this particular key, hand points in Branston Junction (Burton) sidings, possibly a connection into the former War Department sidings. Annett’s keys could still be found in use up until recently, testimony of there simple and robust design…

The photograph is used by the kind permission of Mr M. L. Knighton.